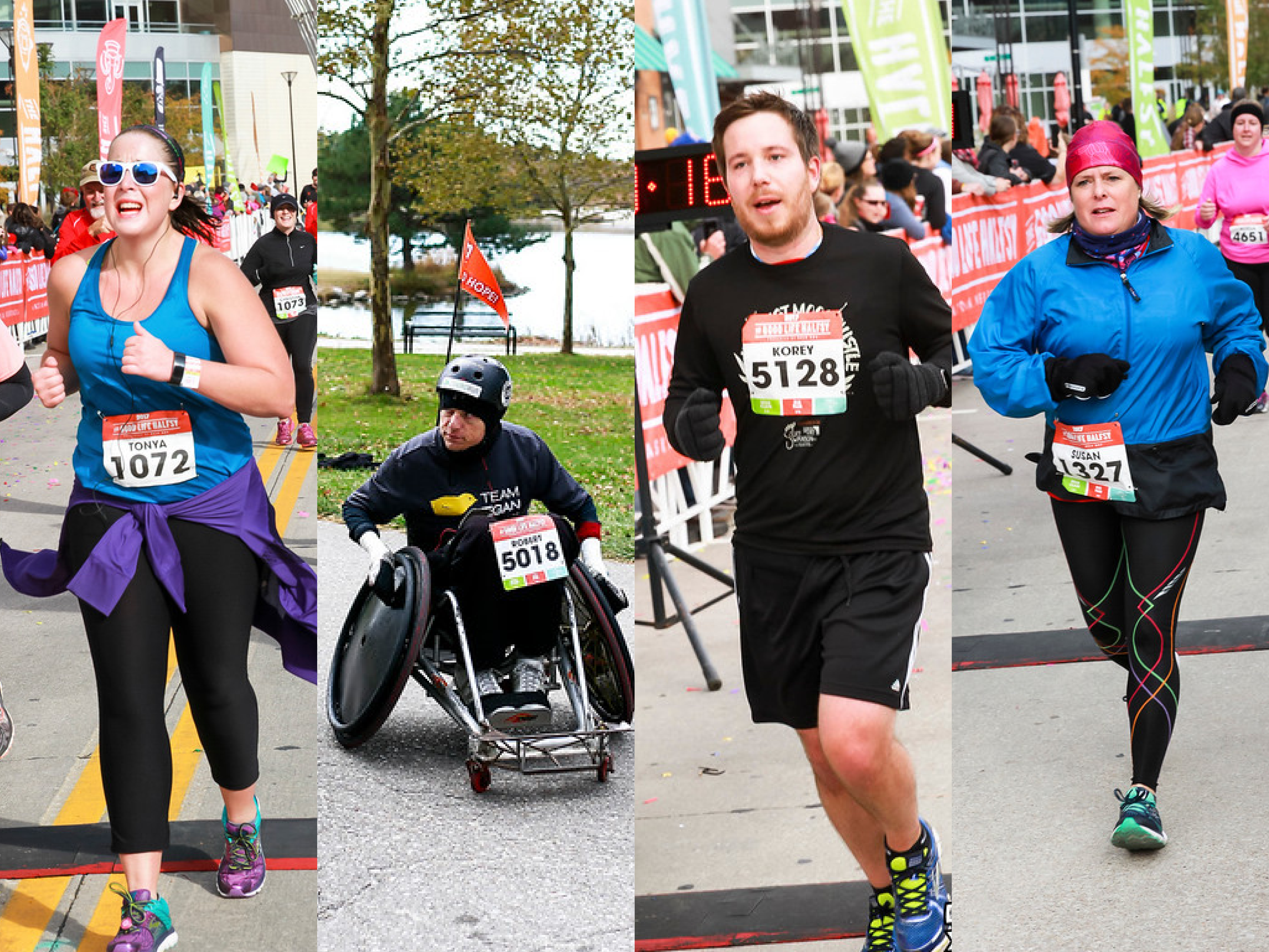 These stories are the final parts of a four-part series about our Halfsy Heroes, Tonya O’Neel, Robert Rieck, Korey Donahoo, and Susan Swearer. Our series followed our heroes as they trained for the 2017 Good Life Halfsy.

Tonya O’Neel – Ready For Her Next Goal

“I spent so long training, it seemed almost obvious that something like this would happen just days before this race I’d spent so long preparing for…”

As Tonya O’Neel suffered from a case of the flu, she debated a trip to the emergency room and wondered if her year of training was for absolutely nothing.

She muscled her way through the worst of the illness and even managed a kickboxing class and one more run over the bridge the Friday before the Halfsy on Sunday.

Her friends and family had all been assigned specific mile markers so she would know who to look for without having to slow down.

“My 2-year-old nephew, Will, was at the 9th mile. I could just hear his sweet little voice yell ‘I found her!! There she goes!’ It was the sweetest thing. That little voice!”

But after her nephew was behind her, the fatigue started to set in. Around mile 11, Tonya started to lose her focus.

“I had been going along with the 2:20 pacer, and I was feeling really good. I knew I was starting to get really tired, but I told myself that with only 2 miles left, even if I walked, I’d still finish in a reasonable time. I had lost sight of the 2:20 pacer, but I was still going, and then just like that, the 2:25 pace group all just ran right past me.”

Tonya knew that as her body slowed itself down and the exhaustion set in, her goal of finishing the race in 2:30 was slipping through her fingers.

“I kind of zoned out between the 11th and 13th miles. I know I was just tired, but I was out of it at that point. And then I was on the bridge, and you see everything and everyone is cheering and then you’re there. It’s over in just a moment. I finished in 227, which was better than my goal.”

After running hundreds of miles over months to prepare, the moment had come, and gone, in less than two and a half hours.

After her race, she had planned to just go home and rest, and even took the next day off work to recover, but life had other plans.

“We went to a trunk or treat after the Halfsy, which was nice. It had turned into a really nice evening. Then the day after the race, I still felt really good, so I tackled some tasks. I was up on the roof trying to get down some siding that was damaged in the wind, then I cleaned. I thought I’d need to rest. I just didn’t.”

And when the decidedly non-runner was asked if she wanted to continue her racing career, she felt no uncertainty.

“No. I’m still not a racer. I’ll still train. I’ll still keep running through the winter, and maybe intensify it a little when Spring comes, just so I don’t lose what I’ve gained… But I don’t expect that I’ll be the person who signs up for all of the 5ks and marathons. I think maybe, the Halfsy will be my race, and that will be the one I stick with. And next year, I’ll be back even better.”

Robert Rieck – Finishing on Sheer Will

As Robert Rieck raced to assemble his heavy chair, he heard the call to start. This wasn’t Robert’s first Halfsy, but it was his first race since his chair had been modified.

“When I push the chair forward, it launches itself up and teeters. I spend more energy trying to right my chair than I spend actually racing.”

Robert had his chair adjusted before the race but hadn’t had a chance to assess how the modifications would affect his time.

“I noticed really fast that chair was still teetering really hard. I knew it would set me back.”

And then his tires malfunctioned.

And with these mechanical errors piling up, Robert felt the drops of rain on his face. His family had all been on high alert and were messaging about the rain.

“Rain is the only thing I can’t push through. Rain takes me out…”

But he dug deep and decided to push for as long as he could.

The sprinkles dissipated and weren’t enough to register as a rain. They were just enough to fuel Robert to push through them, and whatever other malfunctions this day could throw at him.

“I heard people complain about the cold, but it was actually just perfect. My body temperature doesn’t regulate itself, so the cold kept my body from overheating. It was a really nice day.”

And as Robert pushed harder to overcome his setbacks, he pushed himself to a personal best time.

“I finished 16 minutes faster than my fastest time.”

“It’s always a great race, and they make it better every year. I’ll be back next year!”

After months of setting goals, Korey Donahoo was ready to put his feet where his mouth is. As usual.

“I spent all of these months ready to just get through it, hoping maybe I’d enjoy some of it before it was over. I enjoyed the whole thing. I won’t lie and say I wasn’t tired, I was tired. But I enjoyed it.”

“Some of my family came in from out of town, and my parents had planned a camping trip, but drove back to be there for me.”

Between his family, and the members of his team from The American Outlaws, Korey had a lot of people to impress, and he didn’t fail them.

“I got to that last hill and wasn’t sure I could make it up. I kept thinking ‘C’mon, you’re so close!’, and then I was on the bridge. It’s everything everyone said it was. The energy, the people, and that moment of finishing.”

And the sore legs he felt the next day weren’t enough to spark an ounce of regret.

“I thought once I was done I’d be done, that I’d never want to do it again. I do, though. Maybe I’ll do another before the next Halfsy, just to stay in shape, but I’m definitely in for next year’s Halfsy.”

Korey’s journey from spectator to respectable-paced racer (He finished in 2:07!) came with its fair share of aches and pains, but the perseverance he gained was enough to propel him off of the sidelines and over the finish line.

In the years, months, and weeks leading up to the 2017 Good Life Halfsy, Susan Swearer had to face obstacle after obstacle. From a nearly catastrophic injury which cost her over a year of recovery, pneumonia, and rehabilitation, to the heavy rains that put a damper on her training, she wasn’t going to let nature, fate, or even her own body come between her and her finish line.

“Two of my students were racing with me, and even though I kept insisting that they just run at their own pace, Raul just wouldn’t leave my side. He kept pace with me, even as I started to fall behind my goal and my family started texting him to make sure I was ok. They were all so sweet. I had so much support!”

And that support has helped Susan overcome so much in the last couple of years.

“I couldn’t take the time to wonder if I could do it. It would be too easy to see that I couldn’t. My right side is still just not keeping up. The injuries are still there. But I had a plan, I had my training, even though it was hampered a bit recently. I was going to finish, even if I was the last person across.”

“By the eighth mile, I knew I was going slowly, but I was still feeling really good. It’s the slowest pace I’ve ever raced at, but I was doing really well. After that, I started to feel the lack of training kicking in. I just got so tired, but everyone was pushing with me. You really feed on the energy of the people cheering, strangers are stopping to tell you that you’re doing great and keep going. It’s such an amazing event and it brings out so much good in people.”

While she expected a huge emotional moment as she crossed the finish line, what she felt instead was an exchange. While she was leaving 2 years of trauma, pain, and setbacks behind her, she was walking into the realization of just how capable she is. Instead of a moment of completion, she experienced a moment of a new beginning.

Check back for next year’s Halfsy Hero stories, or go back and read the previous installments of our 2017 heroes stories.