Julia, Melissa, Jenn, and Christina – We Finish Together 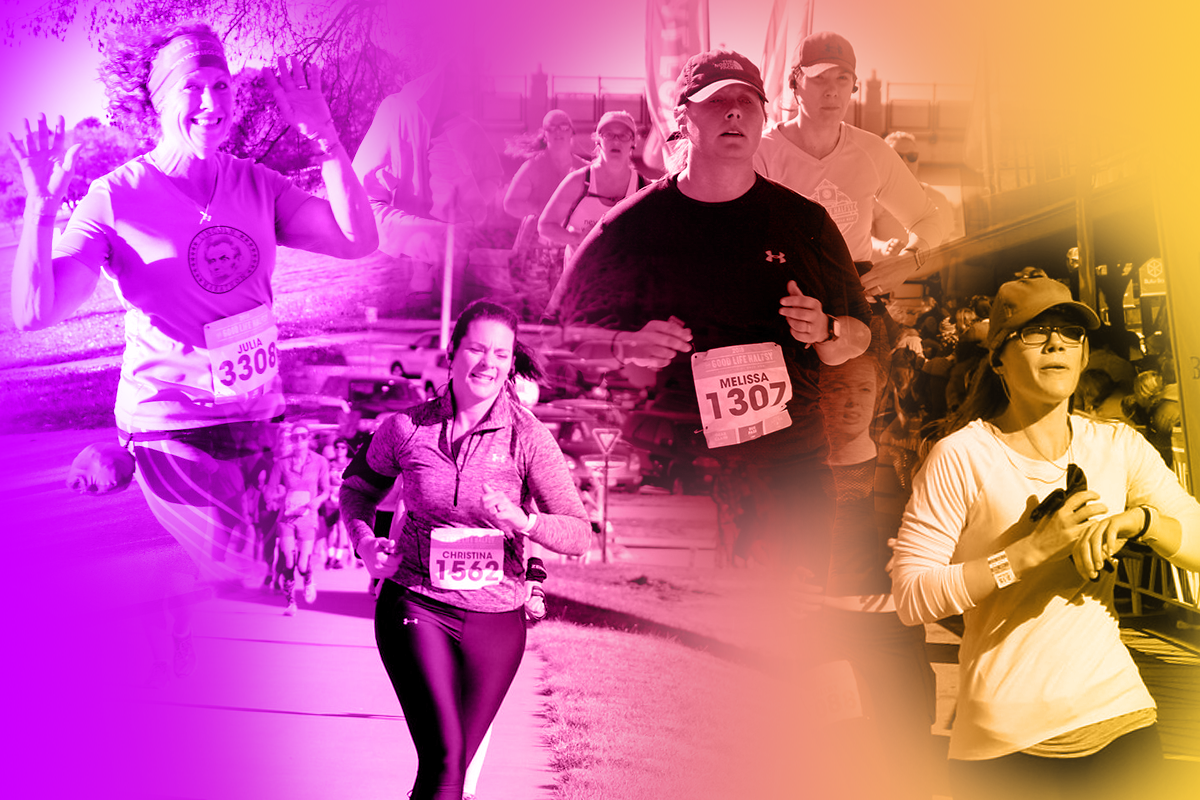 This is the final installment in our 2018 Halfsy Heroes series. These stories have followed Julia Wessel, Jenn Schroeder, Melissa Omar, and Christina Liekhus as they’ve prepared for this year’s Good Life Halfsy.

This year’s Halfsy Heroes came from different stages of life, different attitudes about running, and with different obstacles to overcome, but when Sunday arrived, they had more in common than you might guess.

They had all struggled with finding time to train this season. Work schedules, the weather, injuries, illness, and family tragedies set back each of our heroes. They all faced the question of why they had even signed up to compete in such a taxing event.

This year, 6,500 runners came from every one of the 50 United States to race 13.1 miles to the finish line. Every runner had to physically, mentally, and emotionally prepare their one and only body for this journey. Running is a solo sport, but not one of the 6,500 runners crossed that finish line alone.

For Julia, the only person she wanted to finish this race with was the person she started this journey with over a year ago. When an injury threatened her daughter’s ability to keep pace, Julia considered slowing herself to wherever her daughter was on race day.

“She told me, ‘Mom, don’t you dare! You run this whole way!’. I agreed that no matter what, I would run the whole time.”

But Julia didn’t have to leave her daughter behind, and instead, they pushed one another to not one, but three personal records.

“The first record was the distance. This was the longest run we’ve ever done! The second was that we ran the entire time. I thought there would be a couple of stretches where we would walk, but it didn’t happen! And the third was our time. We finished in 2.25.44. That was unexpected!”

One thing all of our Heroes had in common this year was the dreaded wall. For Julia, it hit at the 10-mile marker.

“I just couldn’t see the end. I was tired. Just tired. That was the point when I thought we were going to stop or at least slow down. I was hurting… but Ashley just said ‘Mom, go. This is just a 5k. That’s all that’s left. You do 5ks all the time! You can do this!”

“We made it to the bridge and suddenly the weight of it all just lifted. It felt like we were just rolling right down the hill. We crossed the line together, and that was just everything I could have asked for!”

Julia’s goal of being Fit by Fifty is in the bag, and a long and healthy friendship with her daughter Ashley, and their mutual love of running is hers for the keeping.

Jenn had a team of strangers to lean on when questions and doubts began to arise.

“I had a freak out the week before the race. I just thought, my pace isn’t where I want it to be. I haven’t managed to train as much as I should. I don’t know about this… But everyone is just so supportive and they make sure you know you’re not in this alone.”

“I went to the Facebook Page a lot. I went with a question about blisters right before race day. I had been developing blisters after even really short runs. Everyone had a trick or a remedy to offer, and I used them all! I had moleskin, tape, compression socks, and padded merino socks on. I didn’t get even one blister. I was pretty happy about that!”

Jenn wasn’t just on the receiving end of support on the page and was often on there encouraging others, and offering advice and respect to other competitors.

But then Jenn came face to face with the wall.

“I was doing great! I felt a little bloated, but otherwise, I was feeling really good and even pacing faster than I expected. Then around mile nine, I noticed some of the other runners were getting a little dehydrated. Some of them were getting low blood sugar and just kind of crashing… and then it hit me. I just nosedived. I got really nauseated and felt just sick.”

Jenn was physically ready to give up, but her spirit was too strong and her body had no room to argue.

“I kept pushing until mile 13. I slowed way down. When I was training, I slowed down or stopped when I needed to or even when I just felt like it. But at the Halfsy, you have all of these people giving off all of this energy. You kind of don’t want to be the one to bring it down, so you push.”

“I ran from the bridge. I wanted to finish in 2:15, but I finished in 2:22, and I feel really good about that. Especially with how fast that wall hit. I had been looking forward to pizza after, but it was a few hours before I could keep anything down. I ate a few gummy worms and drank Pedialyte just to get some calories and electrolytes into me, but there was no pizza. When I had my appetite back, I went for Pho. It was perfect, the hot, salty broth was exactly what my body wanted. I think it’s the perfect post-race food!”

Jenn relied heavily on her strength, and the support of 6,500 strangers to cross the finish line, while Melissa had a small measure of support waiting for her in the van. Before she was our hero, she was theirs.

“It’s become a bit of a tradition. I wake up around 5:45, then they leave me at the race and head out for breakfast. After that, they wander Target for a little while, buy a movie, and then they watch it in the van while they wait for me.”

The little hearts sitting in that van are doing more than waiting for their mom to finish a workout. They’re biding their time, learning from her example, and slowly understanding what their hero has been training for all of these months.

“I’m always nervous on race day, regardless of the goal. And this year, it seemed like it was so far away for so long, and then suddenly it was just here.”

Without a specific goal in mind, Melissa pondered the event’s time limit.

“Four hours. I knew I could do that. I only felt the need to finish. I wasn’t being competitive with anyone but myself at this point. I picked the 3:15 pace group and felt like I could probably do that. Probably.”

As the miles rolled by, Melissa stayed present, enjoying the sights, the people, and the energy of the event.

“Three days before the race, I rolled my ankle. I was initially worried that it was going to keep me out of the event altogether, but I had felt ok for 10 miles! Then it just hit me. Not a little at a time, it just hit! It started to cramp, and I had to start walking. I didn’t think I could finish. That’s just the truth. But I kept going, and the next thing I knew I was crossing the finish at 2.58.50.”

“My husband and kids were all at the finish line waiting for me. My son covered me in silly string, and I know everyone has something they look forward to after the event, but for me, it’s just going home with them. Just spending a day together.”

Melissa and Christina have both set amazing examples for their children, but Christina’s daughter Izzy is old enough to take her mother’s example and run with it.

“We had done the Hurts Donut run the day before, then afterward she had a game. We took that run pretty easy, just kind of relaxed and took our time. It was kind of a way to loosen up for the Halfsy.”

“My daughter already loves to race. She’s done a couple of 5ks. She likes the competition, with herself and with all of the other runners.”

Christina has learned to communicate with her body, which sometimes means having to anticipate needs her limbs are unable to articulate. During Sunday’s event, however, Christina’s habit of pushing herself hit hard and fast.

“About mile 10, I realized I’d pushed too hard. The last three miles just really kicked my butt. I was still able to finish, but I knew I’d overdone it.”

“When it was over, I went to my brother’s to shower so I wouldn’t have to drive home sweaty, but after that, I just went home. For me, this was just an excellent Sunday. That was what I’d been preparing for, and I did it. Now I’ll prepare for the next one! And that will be a great day, too. I want to be that 80-year-old, walking across the finish line with the slowest pacers, but still crossing. That would make me really happy! To still be doing half marathons at 80.”

And when Christina crosses the finish line at the 2061 Good Life Halfsy, she’ll still be our hero!

Julia: It’s not going to be easy, but it’s going to be worth it! And don’t let your success be measured by someone else’s stick. If you go for your first run and you go one block, be proud of that block! That first run really matters! But then do it again, and soon you’ll run three blocks. And soon you’ll do more. But be happy with it every step of the way.

Jenn: Find your strength. For me, that meant literal strength. I’m still not a runner, and so it was my weight training that gave me the power to muscle through the hard parts and kept me from being really sore the next day. Find what works for you, and go all in.

Melissa: It seems impossible the first time you think about it. If you’ve never run, a half marathon is crazy! But do a 5k. Then do a 10k. It took me a few years to gain the courage to even try! But start today. Do what you can. And be proud of what you can do!

Christina: Know yourself. Listen to your body. You have to really develop a relationship with your mind, your body, and with running. Your first few races, don’t try to be super fast! There are so many paces! There are people walking and having the best time! Do what feels good and right, stick with it, and be happy!

Thank you to our heroes for opening up and sharing their journey with us this year! We couldn’t be more proud of each of you! We’ll see you next time!