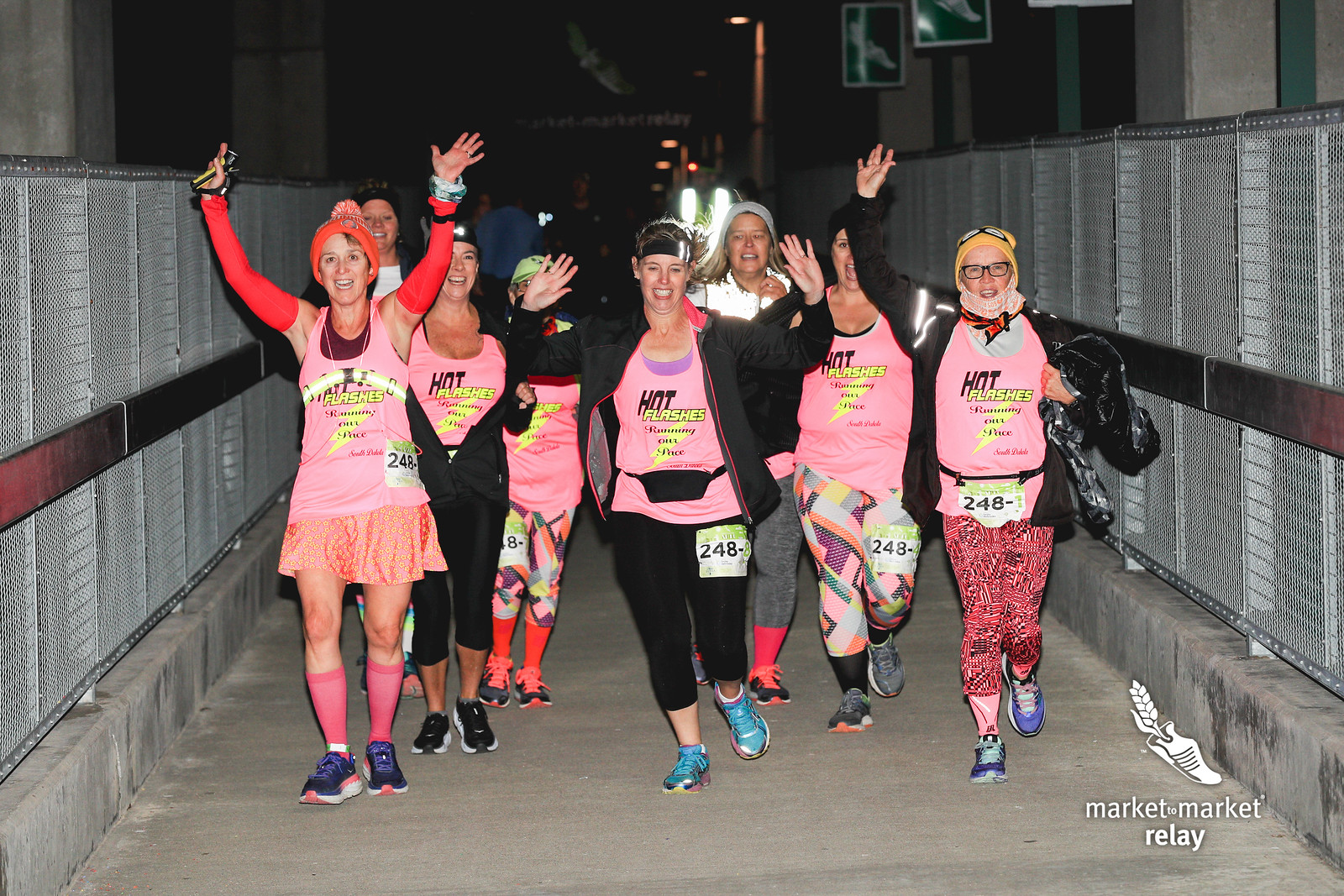 It may have been a chilly day, but Deb Shissler’s team knows how to heat things up!

Deb’s first run happened in 1979. “I saw this boy. I asked around a little and was told that if I wanted a shot, I had to ask him to go running. All I had were these army boots, but I laced them up and before I knew it, I’d run three miles with him.”

That day, Deb found true love. The relationship with the boy didn’t last, but she had a new crush. Running became a love worth chasing, and has resulted in more than 40 marathons and countless 5ks, 10ks, and relays under her belt. But M2M isn’t just another medal on her shelf, it’s an experience Deb looks forward to.

“Everyone in Sioux Falls makes the trip to Lincoln for Pink Gorilla Events. They’re always just really well organized. We’ve run… we’ve volunteered… We’ve never seen any problems. I don’t know how they get that many vans, that many teams all in one place without there being some issue popping up, but every time, it goes off without a hitch!”

“When I grow up, I want to volunteer with all of the Pink Gorilla Events. My sister and I have a plan, when we retire, that’s what we’re going to do!”

But Deb isn’t ready to grow up just yet, and she was excited for her team to cross the finish line this year. But there was just one problem. Deb didn’t have one.

“When I registered this year, I didn’t actually have a team! I turned to my online running group. 3 years ago the page had 100 followers. It’s a closed group, only women. Today there are more than 2000 of us. We just kind of cheer each other on, look out for one another. Some people meet up and run together. I went to the group and said hey, I know I’m not the only one who wants to do this. I registered. Who wants to be on my team? I had to set some parameters because really, who doesn’t want to do Market to Market? But we finally narrowed down the group.”

It was obvious to the women that they had a group they could trust, but the concept was lost on those outside of the closed, close-knit group.

“One of our members, Bobbi… her husband was pretty dubious about the whole thing. He couldn’t believe she was just going to get into a van, go on a road trip, and spend the night with people she had never met. But unless you’re in this group, you just don’t know how strong and supportive these women are. We see one another, we know each other’s faces just from the posts… but after this. We knew right away that we had become friends for life.”

The 8 person team goes by “The Hot Flashes”, and had a strict “You must be this old to enter” restriction. If you saw them passing you by, you might have simply assumed the name referred to their speed.

“We come from different places, different stories, but we all have really important things in common. And Market to Market just has this sense of camaraderie about it anyway. Even outside of your team, you see people helping each other along, cheering for each other. It might be a race, but we’re all going the same way. And just being there has a way of making you feel really good about yourself, and about your team.”

“Whatever our stories are, we all just show up, put any pain or hurt aside, and get this done together. I am just so thankful for my running group, and for this chance. I think we all want to be supportive. These events really open people up to that.”

And while Pink Gorilla Events will wait patiently for Deb to grow up and join our volunteer team, we are thankful that she and her 7 new friends are part of the Market to Market family!